The Sacrality of the Mass, our Tradition and Identity

I intend for this to be the first post in a series of posts discussing the importance and inseparability of the sacrality of the Mass, tradition and the Catholic identity.
Too often does one go to Mass and see the sacrifice, and yes it is indeed a sacrifice, being rushed and hurried along. Perhaps more often still one hears "Kumbaya" or the like being sung.  A crowd of lay people rush into the Sanctuary to distribute Holy Communion. Mass seems more like a sing along of love songs and sharing of mere bread and wine than a Holy Sacrifice during which our Divine Redeemer is made physically present.  Holy Communion is distributed into peoples hands while standing, the fruit of that work is a loss of sacrality of the Eucharist and the Mass.
As one may be able to tell, that which I am going to touch on in this post is the issue of lay "participation" in the Holy Sacrifice of the Mass.  More specifically, the use of Extraordinary Ministers of Holy Communion (EMHC's).
Before the Second Vatican Council (1962-1965) the method to receive the Eucharist was to kneel at the Altar Rail, open your mouth and receive on the tongue. (Communion on the tongue [COTT]) The priest would pray and bless you saying: "Corpus Domini Nostri Iesu Christi custodiat animam tuam ad vitam aeternam amen." Translation: May be Body of our Lord Jesus Christ preserve your soul unto everlasting life." Only the priest was permitted to touch the Sacred Vessels and our Lord, for only his hands have been consecrated through the grace of his ordination. Contrast that with today. Too often does one see someone dressed in jeans and a sport tee-shirt approach the Sanctuary, stick out his hand, hurriedly respond "amen" to "The Body of Christ", usually distributed by an EMHC, pick the host up from their hand and "pop" it in their mouth. How irreverent. It is my opinion that only the consecrated hands of the priest should be permitted to distribute our Lord in Holy Communion.  Communion in the hand (CITH) by EMHC's has destroyed, yes I do use such strong language, the sacrality, reverence and awe that is due to our Lord in Holy Communion. The Mass has moved from being a sacrifice to a "celebratory meal" around the "table of the Lord." If you were Protestant that would be exactly what your service is. However we are Catholic. The Mass is a sacrifice, the same sacrifice as Calvary.  No one was laughing then.
Now please do not get me wrong, I do not believe that EMHC's are bad people.  However they are overused, and almost in all cases, completely unnecessary.  I have never been to a Mass yet where there needed to be EMHC's.  I urge you to reconsider the use of EMHC. Pray about, think of what is happening during the Mass and who we are touching when we receive CITH. 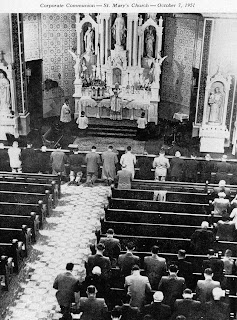 About Me and this Blog

NonSumDignus
I first became interested in the history of the Catholic Church and her traditions around the death of Pope John Paul II. Around that time I began to look into the rich history of the Church, and to my delight, discovered the ancient traditions and customs that would eventually change my life and instill in me a deep and profound love for Christ and for His Church. I am no expert in these matters, but I do have a desire to always learn and read more. Ut in Omnibus Glorificetur Deus!